The BC 5.16 is simple and reliable, making it a very good choice for casual cyclists.

✅ Find out everything you need to know about the compact bike speedometer in this Sigma BC 5.16 test .
✅ 5 easy to understand and useful functions: Current speed, trip odometer, total odometer, trip time, time of day.
✅ Long battery life: 1.5 years or longer

You’re in a hurry? Click here to go directly to the Sigma BC 5.16 bike computer 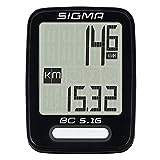 Sigma BC 5.16 Unboxing & Scope of delivery

The Sigma BC 5.16 bike computer is delivered in a stylish box. The following is included:

Mounting and fastening of the Sigma BC 5.16

The assembly goes very easily and is done in about 10 minutes. You fix the mount of the bike computer with cable, the sensor and the magnet to the bike and lay the cable:

Bicycle computer mount Mounting: The bicycle speedometer BC 5.16 can be mounted either on the handlebar or on the stem. Where the bike speedometer is attached is a matter of taste. On the handlebars, I think you have a better view of it and it doesn’t get so dripped with sweat. First, the bracket is attached to the handlebar with a rubber O-ring. A double-sided adhesive pad is also included for mounting. You can use that if you want. I don’t think it’s necessary.

Sigma bike speedometer with cable – laying cable: The cable connects the bike computer with the sensor. There are two ways to lay the cable. Either on the frame and fork itself or on the brake cable. I think the routing at the brake cable is the better solution: You have a quite tidy optics and even with full steering angle enough cable clearance. If you lay the cable on the bike frame, please make sure that there is enough clearance for the cable to pass from the bike frame to the fork.

Mounting magnetic sensor: The magnetic sensor at the end of the cable is now attached to the bicycle fork with a rubber O-ring. If you want, you can secure the sensor and the mount from the bike computer with cable ties. The recordings for this are available on both devices. However, this is purely optional and not necessary as the rubber O-rings already hold very securely.

The rubbers are included in the delivery. If you want to use cable ties for mounting, you have to buy them.

Attaching the magnet to the spoke: The final step is to clip the magnet to a bicycle spoke. Please make sure that the magnet is at the same height as the sensor. The magnet should also rotate past the sensor at a maximum distance of 5 millimeters. A metal sleeve is slid over the magnet to secure it.

5 millimetre distance doesn’t sound much at first. Does the system work and how reliable is it? My practical experience here was very positive: I aligned the sensor once during installation. The values were then always reliably read out and even during rough rides through the forest and over trails, the sensor has not shifted. Really great!

This video shows the assembly of the Sigma bicycle speedometer with cable very clearly:

The Sigma Sport BC 5.16 bike speedometer is very easy to turn on: There is a small button on the back. The so-called set button. This must be pressed for 4 seconds and then the bike computer comes to life. The set button is intentionally made very small but you can still press it quite well with your fingernail.

The initial setup is then quick and goes very easily. You can set the following:

The setting of the Sigma bicycle speedometer with cable including the wheel circumference setting is explained clearly in this video:

The functions of the Sigma BC 5.16

While driving, you can display the following functions on the Simga BC 5.16:

The current speed is always shown on the upper display area. So you have them permanently in view. In each case, a different value is shown on the lower display area. Pressing the large mode button (on the front of the housing) switches the display to the next value. The indication on the display is large and clear. The display is very easy to read even in bright sunshine or in changing light conditions, e.g. in the forest.

If you hold down the mode button for a long time, all values except for the total kilometres are reset to zero. In the Sigma BC 5.16 test, I was particularly impressed by the simplicity of the functions.

The Sigma BC 5.16 bike speedometer is waterproof according to the international standard IPX 8 (“protection against permanent submersion”). So you don’t have to worry about driving in the rain.

Buttons & Operation of the Sigma BC 5.16

The operation of the Sigma BC 5.16 is very simple and easy to understand. This is also due to the fact that there are only two buttons on the bike computer:

The mode button on the front of the housing: The mode button is very easy to press and you can operate the bike computer even with thick gloves still quite comfortable. The pressure point of the key is precise and thus inputs are reliably recognized every time.

The set button on the back of the device: The set button is only needed when setting up the bike speedometer for the first time or if you want to change something in the settings. During my Sigma BC 5.15 test, I found the set button a bit fiddly to operate, as it is recessed quite far into the housing. You can press the key in quite well with your fingernail. It is more comfortable if you use a pointed object to press it in. As I said, the button is only needed for the initial setup.

The Sigma BC 5.16 bike speedometer also detects the movements of the bike: If you start moving then the measurement is started automatically. If you stop, the recording of the current driving time is also stopped. So you don’t have to think about anything and can start cycling relaxed. That’s very convenient.

The Sigma bike speedometer with cable holds securely and reliably in the mount: Even long rides over cobblestones, rough forest paths and frequent MTB trails are no problem at all. Since nothing wobbles and the bike speedometer holds bombproof on the handlebar.

On the display of the Sigma BC 5.16 bike computer, the writing is clearly visible: The writing is large in black and white and is easy to see. The contrast on the display is excellent. Despite low reflections, the screen is therefore almost always excellently readable: Both in sunshine and in changing light, e.g. under a dense canopy of leaves, you can read the writing on the screen very well.

If you do not drive for a few minutes, the display switches off. The BC 5.16 then displays the current time on the screen.

You hardly have to worry about the battery life, because the Sigma bike speedometer with cable is a long-running device.

Sigma says about the battery life: The battery lasts approx. 1.5 years if 7300 km are ridden at a speed of 20 km/h. The battery can be recharged at any time.

For most recreational and pleasure cyclists, the battery life should thus be easily sufficient. By the way, the battery is already included in the delivery and also already installed in the bicycle speedometer.

The Sigma BC 5.16 bike speedometer does not provide much data for evaluation on a computer or smartphone. The bike data can be read out via smartphone or PC. Via the Sigma Cloud, the bike computer data can then be accessed at any time on a wide range of devices.

Data analysis on a computer or Mac: For the readout of the BC 5.16 bike computer with cable, you need the Sigma PC adapter Sigma Docking Station Topline 2016* as an accessory. With this you can read out the Sigma BC 5.16 on a Windows computer or with Mac OS.

Data evaluation on smartphone: With this USB OTG Usb Type-C Adapter* you can also connect the docking station to your Android smartphone (Alternative adapter for smartphones with Micro USB*.). The Sigma applications and apps you need are free and I’ve linked them to you right here: 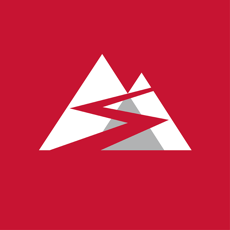 You can download the SIGMA LINK APP from the Google Play Store or the iOS App Store.

You can download SIGMA DATA CENTER for Windows and Mac OS at www.sigma-download.com.

With the apps and application, you can also set a service interval on the bike computer. The Sigma BC 5.16 then shows “Service” on the display when you have reached the saved total distance. The function is very useful to remind yourself to maintain the bike or then take your bike to the dealer. This way you are safe on the road and your bike stays in top condition.

How does the Sigma bike speedometer with cable compare to other current Sigma bike computer models and where are the differences?

Let’s move on to the Sigma BC 5.16 test conclusion:

The Sigma BC 5.16 is one of the most popular bike computers on Amazon. It has the five most important functions and shines with a small housing. The bike computer is easy to set up and the operation is immediately understood. The Sigma bike computer sits firmly on the bike and works simply – making the BC 5.16 ideal for those who want no frills.

Despite the compact design, the functions on the display are large, clear and easy to read. The operation is excellent: In essence, there is a button on the front of the housing: This allows you to switch the display on the display and the button is always easy to reach. There is no display illumination, so you can’t read the screen in the dark.

The Sigma BC 5.16 is the ideal bike computer for recreational cyclists and beginners. Who wants to be reliably informed about speed, driven kilometers (current and total), the duration of the current tour, the Sigma BC 5.16 is right.

What the bike computer does, it does reliably and well.

❌ No display illumination: And therefore not readable at night

Alternatives to the Sigma Sport BC 5.16

The inexpensive entry-level Sigma BC 7.16 bike computer also offers the average speed function and the display of the total riding time. It is almost as compact as the Sigma BC 5.16 and costs only a few euros more.

The Sigma BC 7.16 bike computer is available in two versions:

The Sigma BC 16.16 bike computer has many more functions and is therefore probably more than sufficient for almost all everyday cyclists. The Sigma BC 16.16 is best suited for use on multiple bikes, because it stores two bike profiles. It can also measure cadence. However, for the use on two wheels and for the cadence measurement you still need accessories.

The display is very easy to read: during the day and thanks to the backlight also at night.

The Sigma BC 16.16 bike computer is available in two versions:

To the detailed Sigma BC 16.16 field test (test & experiences)

Was the Sigma BC 5.16 test helpful to you? Do you have any questions? Feel free to write me your comment.