You are looking for a simple and cheap bike computer? Complex functions such as altimeter, heart rate and GPS you do not need? (Bike computers with more features can be found here)

✅ In the bike speedometer test and comparison I show the best current models.
✅ All have only the most important cycling features and are easy to use.

In testing, the Sigma BC 5.16* proved easy to use and packed with useful features.

As I said, the simple bike computers presented here are really simple models. They are true long runners and the battery often lasts up to 2 years.

Simple bicycle tachos with the most important functions

Further functions and special features are shown in the table: 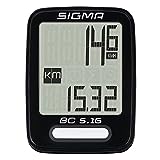 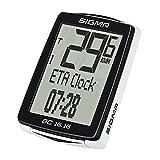 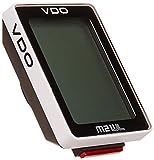 These bike computers are reliable and easy to use

Sigma BC 5.16 – simple bike speedometer with most important functions

The Sigma BC 5.16 is one of the most popular bike computers on Amazon. It offers the most important five basic functions in a compact housing.

The Sigma BC 5.16 bike speedometer has the following functions:

The housing of the chic Sigma BC 5.16 is very compact. Nevertheless, the functions are shown very clearly and legibly on the display. Large and easy to reach are the buttons on the bike speedometer: This allows you to quickly scroll through the different display views unerringly.

Sigma BC 16.16 bike speedometer with many functions

If you want more functions, then the Sigma BC 16.16 is the right bike speedometer for you.

The Simga BC 16.16 is also ideal for use on two bicycles, because it can store two different wheel sizes and calculates the kilometres travelled together (the second speedometer holder is an extra accessory). A sensor for cadence measurement is also available as an accessory.

The Sigma BC 16.16 bike speedometer has the following functions:

In the sun, the Sigma BC 16.16 is perfectly readable and thanks to the backlight, the display can also be easily read in the dark.

The Sigma BC 16.16 bike computer is available in three versions:

Now the most important questions about the bicycle speedometer are clarified.

Why should I buy a bike speedometer?

So you have the overview and can be proud of how much you have cycled in the year. With the displayed information, you can also better manage your forces.

Inexpensive bike computer: These functions it has

Bike speedometer with cable or wireless: The differences

The following features, advantages and disadvantages are offered by the technologies in the bike computer.

A bicycle speedometer is quickly mounted on the bicycle. The mounting differs slightly from model to model and for the bike speedometer with cable, the cable must also be laid from the bracket on the handlebars to the sensor on the bike fork.

In general, assembly takes less than 10 minutes and is usually possible without tools. This is how you get your odometer on your bike ready to go:

Fixing the bike tachometer bracket: The bracket can be attached either to the handlebar or to the stem. The bracket is attached to the bike with either cable ties or rubber O-rings. Sometimes an adhesive pad is included as a mounting aid. The mounting of the bracket also works wonderfully without this tool.

Laying the cable from the bike speedometer to the sensor (only for bike speedometers with cable): For bike speedometers with cable, the data is transferred between the bracket and the magnetic sensor via the cable. This cable must now be laid. Either you run the cable over the stem, to the frame and then to the bike fork. Alternatively, you wind the cable spirally and evenly on the brake cable down to the fork. This solution provides a tidy appearance. In addition, you always have enough cable available even at maximum handlebar angle. With the first mentioned solution (stem, frame, fork) you have to take care of the correct length of the wheel speedo cable yourself.

Fix the magnetic sensor to the fork: The sensor is located at the end of the cable and is also supplied with power via it. With the wireless bike speedometer, the battery for power supply is in the sensor. Of course there is no cable with the radio bike speedometer. The sensor is attached to the bicycle fork with rubber O-rings or cable ties. Pay attention to the correct alignment of the sensor: between sensor and spoke magnet may usually be a maximum of 5 mm distance. Therefore, the sensor should be directed towards the front wheel spokes.

Attaching the magnet to the spoke: The magnet is usually located in a plastic sleeve. This cover is simply clipped to a bicycle spoke and holds there securely. In order for the signal to be read, the spoke magnet and sensor should be at the same height.

After successful assembly, your bicycle speedometer is as good as ready for use. The data transmission between sensor and wheel speedometer is usually already set up at the factory.

Now the wheel circumference still has to be adjusted correctly. This is the only way to ensure the correct calculation of speed, distance and other bike data.

Many wheel tachos already have presets for the common wheel sizes. However, these presets are quite inaccurate. Better you set your bike speedometer correctly yourself.

There are three ways to do this:

All three methods are shown in detail and easy to follow in the Correctly Set Up Bike Computer article.

There are now many good cycling apps. I also sometimes use my smartphone as a bike computer. The large touchscreen is a lot of fun to use and there are some excellent bike navigation apps. In comparison, however, there are some disadvantages with a smartphone:

Still want to use your smartphone as a bike speedometer? Then these articles are useful for you:

In the bike speedometer test you have learned the important aspects when buying a bike speedometer. The table above gives you an overview of recommended bicycle tachos and their functions. You also now know that most Radtachos are available wired and wireless.

Once you’ve ordered your new bike speedo, this article will also help you assemble and properly adjust your bike speedo.

Have you found the right bike speedometer for you? Do you have any questions? Feel free to write me your comment.