The BC 23.16 is the top model of the Sigma Sport bike computers. The special feature of the BC 23.16 STS is its wide range of functions.

Cyclists who like to record their data extensively and then evaluate it precisely are also right with the Sigma BC 23.16 STS.

What the smart bike computer can do and what not, you will find out in my detailed Sigma BC 23.16 test.

The following equipment is included in the scope of delivery of the Sigma BC 23.16 STS:

Mounting and fastening of the Sigma BC 23.16 STS

The Sigma BC 23.16 STS is very easy and quick to mount: The bike speedometer can be attached either to the handlebar or to the stem. The bracket is simply attached there with a rubber O-ring. For mounting, your double-sided adhesive pad is also included. I find that installation is easier and even faster without the adhesive pad. For better theft protection, you can also secure the bike computer mount and later the sensor with cable ties. Corresponding eyelets are provided on the bracket and on the sensor.

The magnet itself is simply clipped into the spokes. You have to press a little harder to get it clipped down correctly. If the magnet is attached, then it holds thanks to the rubberized inside particularly securely – I would say: It holds bombproof on the spoke! It can be additionally secured with a metal sleeve supplied.

Then you screw the bracket for the cadence magnet into the pedal axle. After the cadence sensor is attached, the bike computer is also ready for use.

The following video shows the assembly of the Sigma BC 23.16 STS very well:

The Sigma Sport BC 23.16 STS is operated with a total of 5 buttons and the menu navigation is intuitive. There are even extra buttons for the most important functions. In total, the bike computer has buttons for the following functions:

Press and hold the Menu button to enter the Settings menu. For the bike computer to work accurately, it is best to make all the settings in the settings menu. You can make the following settings for the Sigma BC 23.16 STS:

First you make the basic settings in the menu: You can choose between 7 languages and the contrast of the display can be adjusted in 3 steps. You also enter your weight and the current date.

In order for the barometric altitude measurement to work correctly, the altitude must first be calibrated. Here you make two settings: First, you save the start height . For example, it is advisable to choose the altitude of a place where you often start your training e.g. from your home. You can also save your current altitude and adjust it at any time. You can easily determine your height here.

You can also turn the NFC interface on and off for data transfer.

Sigma specifies water resistance for the BC 23.16 STS according to international protection class IP8X. The bike computer thus has “protection against permanent submersion”. This should protect the BC 23.16 STS from even the heaviest rain.

In my test, I had submerged the Sigma bike computer under water several times. As expected, the BC 23.16 STS continued to function properly after the dive. The bike computer, can be operated even in wet conditions (or even under water) at any time flawlessly – very good. Bicycle computers and navigation systems with touchscreens sometimes have major problems operating in wet conditions.

The most important functions are always displayed on the BC 23.16 STS so you can keep an eye on them:

With a key combination you can also display individual functions enlarged.

You can use the Sigma BC 23.16 STS on two different bikes: you can set the wheel circumference for both bikes. The bike computer recognizes by itself on which bike it is currently mounted.

The operation of the Sigma Sport BC 23.16 STS is very simple with the 5 easily accessible buttons. The buttons are large and can be operated perfectly with cycling gloves. Once the bike computer is mounted, then it holds bombproof on the bike, there is nothing rattles and wobbles.

The bike computer can also be removed and attached within seconds: A quick turn is enough and the BC 23.16 STS is either snapped in and out. This is of course practical, because especially in the city you want to remove the bike computer when you are not at the bike.

The display is 3 x 3 cm and has a black and white display. You can read the display perfectly in any situation thanks to the high-contrast display. Whether in the sun or under changing light conditions such as in the forest, the values on the display are always easy to read.

Thanks to the adjustable backlight, the display is easy to read even at dusk and in the dark. The illumination can be switched on and off in the settings menu and at any time by a key combination (upper and left key simultaneously).

The display is a little reflective, but that is actually not disturbing in any situation.

The display is divided into three display areas. In the upper area, either one or four values are displayed simultaneously. Both views are very clear and can be switched at any time with a key combination (menu key at the top and pulse key at the same time). The bluish backlight is very practical. If it is activated, it switches on for 3 seconds each time the button is pressed.

The battery life of the Sigma BC 23.16 STS is really long: according to Sigma, the battery should last for about 1.5 years or 7200 kilometers with normal use. The bike computer informs you about the battery status in good time before the battery runs out. So you can change the battery in time.

The Sigma BC 23.16 STS automatically detects when the ride is started and stopped. The recording of the activity then also starts and stops automatically. On the one hand, this is very practical and saves the battery: The bike computer automatically switches to standby mode after a few minutes. This further conserves battery life.

The Sigma BC 23.16 STS measures a large amount of data. How well can these be evaluated?

For the evaluation, the most convenient option is the smartphone app (Android and iOS) Sigma Link. For the computer (Windows and Mac) there is also the Sigma Data Center application for extensive analysis of your own activities and of course activities can also be viewed directly on the Sigma bike computer.

Let’s take a close look at the possibilities:

Data evaluation on the smartphone (Android and iOS): The data can be transmitted wirelessly from the BC 23.16 STS to the smartphone. The radio standard NFC (Near Field Communication) is used for this purpose. This is not quite as convenient as a Bluetooth connection, because the two devices have to be very close to each other for data transmission, or in practice they even have to touch each other. If the devices are moved during the data transfer, the transfer is interrupted. After a short time you have the handling here out and the data can be transferred quickly to the smartphone. With the Sigma Link App, extensive evaluation options are then available. The activities are graphically presented in a nice way. In addition, sports portals like komoot and Strava are directly connected, where you can upload your activities directly.

I really like the Sigma apps overall and have linked them to you here: 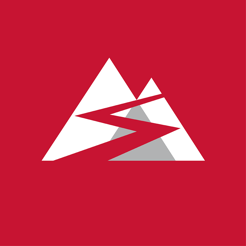 Data evaluation on the computer (Windows and Mac): The activities of the Sigma Bc 23.16 STS can also be viewed and evaluated on the computer. The functions are similar to those in the Sigma app. You can download the Sigma Data Center application for free at Sigma-download.com. For the data transfer from the bike computer to the computer you need the official Sigma Docking Station Topline 2016*.

The Sigma BC 23.16 STS stores settings and total values permanently in the internal memory. So if the battery should go flat or you change the battery, your data will still be there. You just have to set the current time again.

Sigma BC 23.16 STS Experience and Summary

The BC 23.16 STS is an impressive bike computer and provides extensive measurement values. Important data that cyclists love is captured by the BC 23.16 STS. These include: Cadence, heart rate and altitude measurement. The range of functions is thus complete.

Power measurement in watts is supplied as a calculated value. Once you have completed an activity, the data can be conveniently analyzed on your smartphone or computer. The data transfer via NFC is not very convenient but works after the first attempts.

The Sigma bike computer is quickly installed and you can start cycling immediately. As I said: The data variety is enormous and therefore you have to get used to the operation for a short time. Overall, however, the operation is intuitive and quickly learned. Sigma Sport has done a very good job here.

Of course, comfort functions such as backlighting are also included, so you can also drive by.

You are a road cyclist or ambitious cyclist and want to monitor and evaluate your fitness data extensively? Then the BC 23.16 STS is the right bike computer for you.

❌Wireless NFC connection to the smartphone not very convenient.
❌ no cable ties included in delivery
❌ no GPS installed – see alternatives below 🙂

Alternatives to the Sigma BC 23.16 STS

Similar range of functions – no interface to smartphone or computer: The range of functions from the VDO M6.1 is also complete and therefore comparable with the BC 23.16 STS: It is a bike computer with heart rate monitor, cadence and altimeter. It also has other convenience features like a backlight and you can use the bike computer on two different bikes. The perfect bike computer for road bike riders? Unfortunately, the data cannot be transferred to the computer or smartphone. If you don’t need that, you can save a few euros with the VDO M6.1. 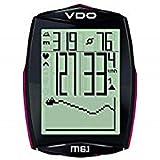 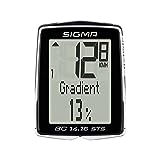 To the detailed Sigma BC 14.16 STS field test (test & experiences)

The range of functions of the Sigma ROX 11 is similar to that of the BC 23.16 STS. More values can be shown on the display at the same time and the bike computer offers minimal navigation (arrow without map in the background). In addition, distance and speed can also be determined without sensors and via GPS. The bike computer is available either with the magnetic sensors in a bundle or you buy the pure bike computer ROX 11 without sensors. I recommend you buy the sensors from of the Wahoo sensors for speed and cadence wp_closed=. These are more robust in operation. 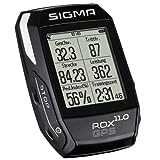 Did the Sigma Sport BC 23.16 STS test help you? Do you have any questions? Feel free to write me your comment.